Technology For Viewing the Histories of Cities

Studying history gives us patterns that we will repeat if we don’t learn from those existing patterns (yup, those who don’t learn history are bound to repeat it). For example ,if we cut funding for social programs that deter gangs then the number of gang-related crimes will increase. That doesn’t take a long time to play out, but we do tend to forget. In the long-view of history we can find time and time again that civilizations that don’t address environmental concerns will eventually collapse, yet here we are in the anthropecene and experiencing insanely radical weather around the world (sadly, we lack the political will to do anything about it, but that’s a different post). 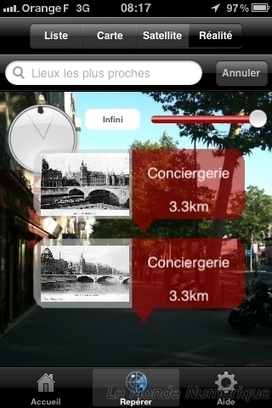 There are companies and organizations that are looking into the use of technology to get history on the minds of everyone. This is obviously a positive thing as far as I’m concerned. I’d like to note two recent strategies that I’ve come across this past week.

My City Before is an app for iOS and Android that literally shows the user images from the past. The app geolocates a user and then shows them pictures in their current area. Of course, it’s possible just to browse the collection at anytime.

It shows images with a brief description about the content of the photo, which will hopefully whet the user’s appetite for historical context and inspire them to find out more. I’m sure that the ability to see different time periods will entice people to wonder “what did it change?” and act on their newfound curiosity.

My City Before has a good scalability factor insofar that it’s the same tech applied to different cities; all it requires is a local historian to fill in the details.

In Toronto there is a project using QR codes to get people engaged with history being done by the Toronto Dreams Project. In essence, they are using creative posters with catchy titles to get people to stop and learn. If the person is interested enough they can scan a QR code to learn more.

I like the idea of using posters placed around town to entice people into a more digital and immersive experience than just stoping to read.

Torontoist has a good article on what they’ve been up to:

So far, about two dozen sticky plaques have been posted around the city, commemorating events ranging from fatal Christmas Eve streetcar crashes to William Faulkner’s drunken adventures in a biplane at the University of Toronto. Among his favourites is the story of the statue of King Edward VII in Queen’s Park, which originally stood in Delhi, India. After independence, the statue was removed from its prime location and left to rot with other colonial monuments until it was shipped to Toronto in the late 1960s.

Still, I can’t help be bothered by the fact that they are using QR codes. The use of QR codes, to me, seems like an ineffective way to communicate cool stories because people don’t use QR codes.

Edit: I realise that the introduction to this could come across as bitter. I’m too lazy to fix it up right now so let’s just hope I learn from this.

Serious Game Companies in Toronto by The Star

I'm Adam Clare I make games at Wero Creative and think about games as a Professor of Game Desgin. I wrote a book on how to make escape games and another book on Pokemon GO.